Someone mentioned I’d not updated blog for a while. But then not much has happened on the sailing front. Just pottered down the New Zealand coast about 50 miles from Bay of Islands, rolling wildly in Pacific swell, via some walking spots and an island or two, to the town of Whangarei. Got to Whangarei just after Christmas and Henrietta has been here ever since. Lots of work, walking, chatting, eating etc. (i.e normal stuff) and a fortnight visiting England.

View of Whangarei from Mt Parihaka

So I’ll fill you in with notes on Whangarei and quick impressions of my patch of homeland Britain.

Whangarei seems to be the preferred city for visiting overseas sailors. (Kiwis call it a city but I’d call it a town). You can sail up the river, through an opening bridge and into the heart of the place.

It has lots of shops, charming walks, weekly market, helpful friendly community, cinema, buses and titbits of cultural interest. From the sailors’ point of view it also has skilled tradesmen, several chandleries, choice of boatyards and experienced fellow travellers.

In and around Whangarei… 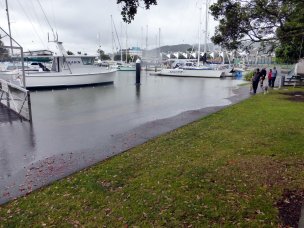 Exceptional spring tide at the marina

It should be heaven on earth, but for me it’s not. Suppose I’ve become too restless and primitive and adapted to life at sea, and already long for open ocean, wide horizons, tropical starlit nights and coral islands in foreign lands. Urban shorebound life seems soulless and unnatural. And, as for the life of most of my fellow men, I can only ask, “Where on earth are you all heading?”

Sorting bits on board… 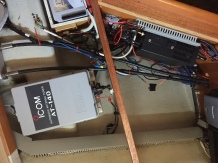 Mid January I flew home for a bit. Life in England (and San Francisco where I stopped for a few hours) seems frantic way beyond the point of lunacy. Everyone rushes hither and thither, plugged into electronica, talking so fast and whizzing about so much, in such chronic state of collective self-denial that it must I fear soon lead to doom. I’ve even grown suspicious of the rapid fire talk of presenters and respondents on Radio 4 (for non-UK readers, this being deemed a reasonably sensible outlet of the BBC). And, since meditation and yoga are out of the question for such frantic and important people, it’s probably way past time to dose water with sedatives and emit soothing tranquilisers from exhaust pipes. Everyone may then calm down and lead themselves and our little planet along a wiser path.

Modern life for people and planet resembles a giant snowball rolling uncontrolled down a steep mountainside. It grows larger and faster, ever more dangerous, totally ignorant of what lies at the bottom of the slope; unable to direct its own course and almost certainly doomed to self-destruct. (And I’m a positive sort of bloke.)

But of course I’ve had only a brief spell away from boat. Ten days’ rented cottage in Devon, visiting family and friends in south west England, reassured and heart-warmed by the generous hospitality of all,  treasuring the familiar beauty of countryside and architecture, marvelling at the range, quality and low costs of an infinite variety of stuff (both useful and absurdly unnecessary).

Delighted that public transport functions so well too. (For public transport cynics I can tell you my visit and local travels involved over 11 buses, around 23 trains, four planes – and almost every single one was on time in UK, US and NZ ….all credit to many unnoticed souls)

As I write, from the saloon back aboard Henrietta, rain is pounding down in Whangarei. After returning on Thursday, she was lifted out on Friday – for the first time in 18 months – grossly infested with barnacles (one of the less pleasant aspects of lying afloat for a month in Whangarei town basin). And so it’s time for boaty chores once more…..I guess we’ll be in New Zealand till end of cyclone season, about April…. 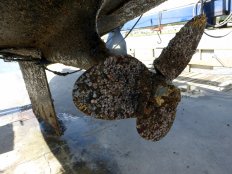 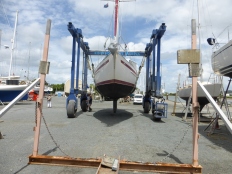