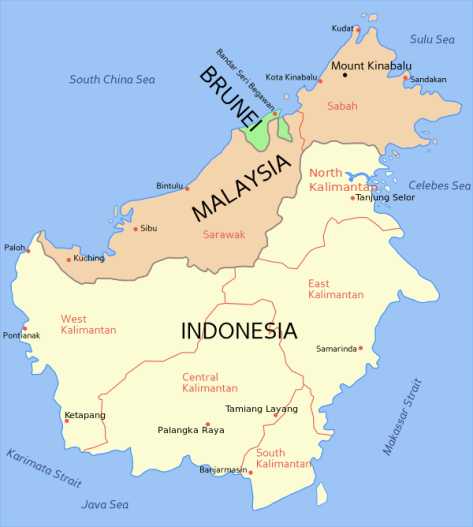 First, a bit about Borneo: it’s the third largest island in the world, more than three times the size of the U.K. The biggest chunk of it, Kalimantan, is within Indonesia. The smallest chunk, but by far the wealthiest per capita, is Brunei. Then there’s East Malaysia, which makes up nearly a third of Borneo, and comprises Sarawak and Sabah. It’s Sarawak and Sabah that I’ll visit in the next two months.

And this chapter of the blog is about Sarawak. It’s the largest Malaysian State by area but has a population of only 2.6 million. It’s wealth comes from timber and oil/gas and palm oil; there’s a lot of all three. The capital is Kuching. I liked Sarawak a lot.

The history of Sarawak is fascinating. A slice of its history from 1839, saw it under the control of colourful eccentric, James Brooke (the white Rajah) and his successors. And after WW II, and the Japanese were defeated, it was a British Colony until independence and Malaysia’s Formation in 1963.

On arriving at Kuching Marina (something of a misnomer for the poorly maintained pontoons that protrude into the rubbish-strewn and fast-flowing river a couple of miles from Kuching) from Natuna, Indonesia; after sleepless day/night sail; my solitary solo sailing life came to an abrupt end – at least for a while.

The delights of two strong-minded, lovely women interrupted the reveries of single-handed life. First my sister, Margie, then Armelle, shook me up and set me on the path to righteousness. Margie brought a wondrous load of gifts that surpassed all Christamases for years gone by (spare parts for Henrietta, plus Waitrose muesli and a pair of top quality M&S swimming trunks!)

She’d come for white sandy beaches and coconut palms. But Sarawak’s speciality is crocodiles, murky waters and mangrove, so alas stayed only a few days before leaving to explore the more attractive islands and towns of sun-blessed West Malaysia. There was enough time for her first to explore thoroughly the streets of Kuching and share a trip to Bako National Park. 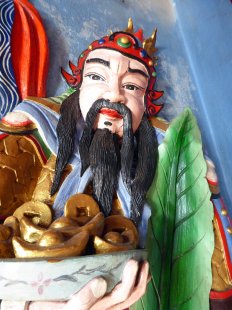 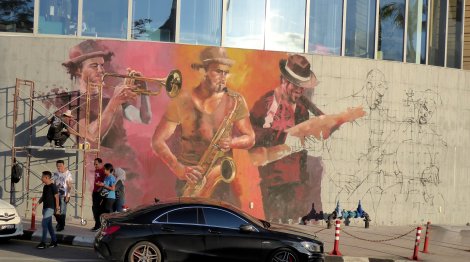 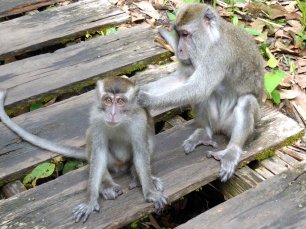 …a short speed boat trip away..

….on to Baku National Park

Then Henrietta headed downriver from Kuching (it’s about 12 miles to the sea) along the coast a bit and into the River Rajeng, which is Borneo’s longest river. To an Englishman it seems huge with 10,000 ton ships, express ferry boats and giant barges heading upstream for many miles, collecting timber or gravel or produce or people from Sarawak’s interior.

…photos of vessels on the Rajeng River…

It takes two days’ motoring along this wide and delightful river to reach the city of Sibu over 100 km upstream; and Sibu is considered only the starting point for river traffic heading even further inland into the rainforest of Borneo’s interior. You anchor wherever you like near the banks of the river, nights filled with all the glorious sounds of rainforest life, though we also stopped at Sarikei a largely Chinese town where we’re shown a glimpse of Chinese life by Stephen Chang, a generous hospitable local entrepreneur. 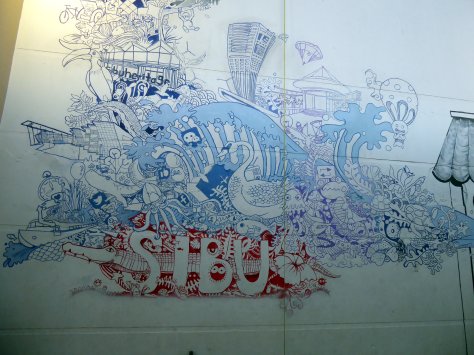 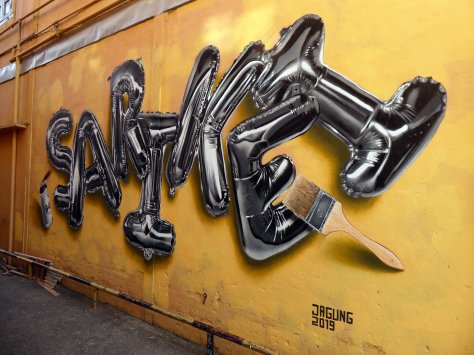 As an aside, I add that for some unknown reason Sarawak’s larger towns have chosen items to ‘adopt’ as their local mascots. For Kuching, it’s cats (the Malay word for cat is ‘kucing’, though city has nothing to do with cats!); for Sarikei, it’s pineapples; for Sibu, a swan; Miri, a seahorse etc. Here are photos to give you the gist of it. Just think what you could do with the town of Sandwich in Kent, UK!

Were it not too tedious for you to read about, I’d fill volumes with the delights of gentle motoring downriver, meeting local people, fishermen, wise forthright men and women, bright smiling children. Listening and seeing and scenting the fabulous colours of tropical rainforest, rainbows, birds and insects.

But, here are some photos instead…. 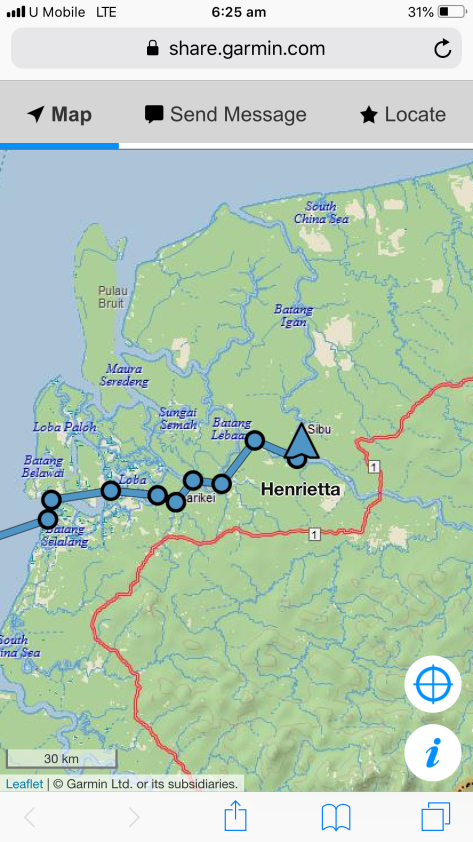 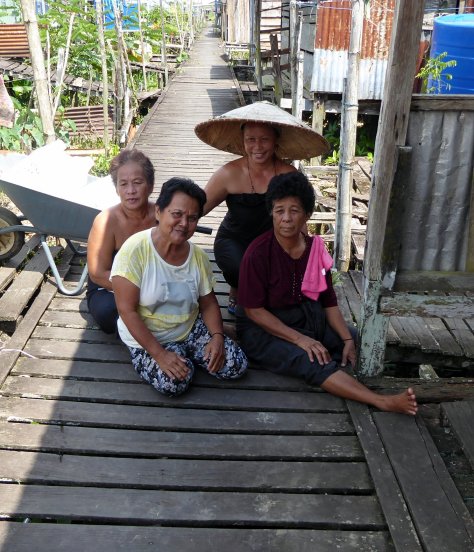 It’s a further two days and nights at sea to next stop, Miri. It’s Sarawak’s second city, wealthy with oil money sloshing about, flattened by bombing in the war, then rebuilt but with little local interest.

However, near to Miri are Niah Caves

…and a day later….we take a short flight to Gunung Mulu National Park (flying is the only practical way to get there). 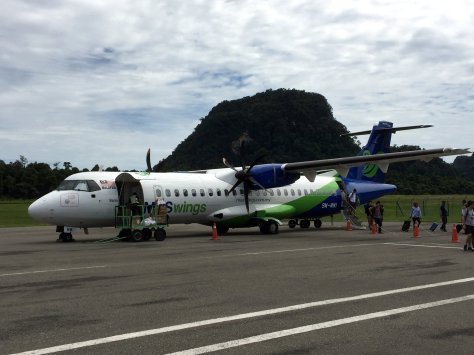 Gunung Mulu National Park is cave country, bat caves, world’s largest cavern included, stalactite and stalagmite country, insect country, rainforest, rivers, and mountains; kind clever industrious people. Again, to save the volumes I’d need to write to describe this fabulous area, for now I shall just add a few photos. If you have a chance, you’ll need to go yourself. 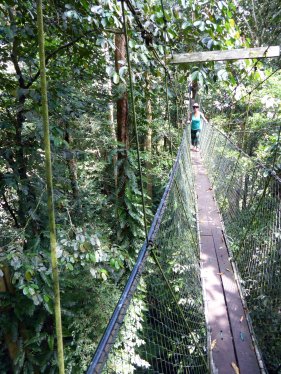 Armelle and I stay on a few days, take a boat upstream and walk to Camp 5. This is the base point for those who’ve booked to climb the Pinnacles. We hadn’t. Instead, the Headhunters’ Trail and unvisited, unspoilt mountain stream provide a wonderful day’s leisure and tranquility. (It had been a sleepless night lying cold and wet in the Camp 5 dormitary, sound effects courtesy of the Malaysian Snorers’ Ensemble).

at this point internet becomes too weak to continue.

After a full month in Sarawak it was time to head north for the next Borneo State of Malaysia, Sabah. 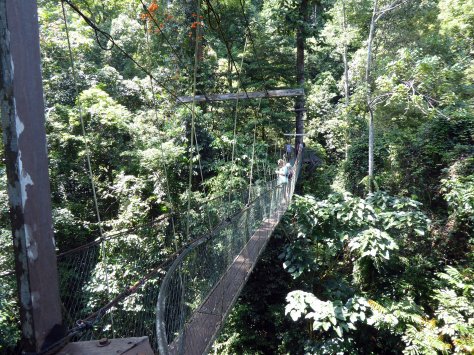 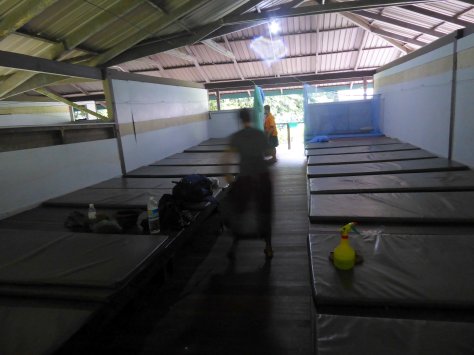