It’s just been me and M for the past ten days. I do the real work of getting us along while M sits around or experiments with my sails, spinnaker pole, Hydrovane, solar panels, electric bits, fixing bits, and cooking bits, and ropes all over the place; and deciding where to go nd how to get there. He does sit around a lot too – thinking or dreaming mainly. Bob left us in Cascais after several unforgettable weeks. He was practical, industrious and willing – beautifully watching my trim at all times (just a bit frustrated with my tell-tails, which he reckoned weren’t up to muchl!)

What has been going on? You’ll remember that I was a bit bruised after the attempt to reach Madeira, and had to return to Cascais, near Lisbon, for repairs. Cascais itself had been a bit battered by the winds too: apart from the oil tanker driven ashore, there was damage to fine old trees in the local park (here’s a picture of a grand and aged tree uprooted – it crashed onto the roof of the unfortunate building behind – all efficiently tidied up soon after). It took a few days for sail repairs, Rutland wind generator left-over bits sent to Corby, chips in gel coat repaired (cause: exploding Rutland = v. alarming), bilges and carpet dried, dodger sewn up. In a nutshell, local Portuguese people have been overwhelmingly helpful, fantastically friendly and generous of their time and advice; fellow sailors a colourful mix of hue and view; Lewmar? Brilliant and excellent service and they’ll send a new and bigger one to replace a bent anchor; Rutland? The jury’s out.

After the unplanned days in Portugal there was just enough time (if weather was ok) to reach Tenerife, about 750 miles away, before Anna’s arrival. Forecast was more-or-less ok. (In fact, if we’re fussy, I’d say the first three days were too windy, the next three too windless – but if you’re too fussy you’d be better off staying in bed anyway.) 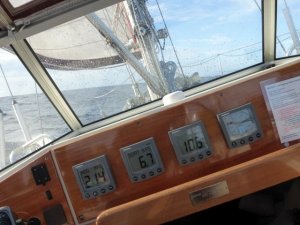 Before leaving Portugal the prospect of M’s first big single-handed trip was a bit daunting. How to sleep enough, manage all this stuff and keep healthy enough, happy enough and sane enough? (M will write more about this another time. In essence though, single-handed sailing a beautiful boat across a grand and wondrous ocean is a marvellous experience.)

Early days with F6/7, and well-reefed sails were fast and exhilerating; choppy seas, spray flying over foredeck, warm sunshine or heavy shower, the sky a riotous jumbled patchwork of clouds in palest washed out pale to darkest inky blue; the ocean swell unceasing and filled with grandeur and power. We are over-awed. At the end of day 6, we approached Tenerife at dusk, finally dropping anchor in the dark, off a remote deserted beach under a mountain, at the north end of the island.

Next morning was wet and windy in Tenerife. I sail a few miles south to Santa Cruz. Anna was flying from Bristol by now. We meet up late afternoon in Santa Cruz bus station….more next time…

One thought on “South to a Canary Island”