I’ll tell you a little secret: Henrietta is 16 boat years old. That’s 32 in human years. She’s in her prime, beautiful, lithe and bursting with zest. I’m well over double her age, so well past my prime, zest less obvious. Henrietta can probably do somersaults and dance daintily almost anywhere. I can’t – and probably never could.

Sailing west (way back in July) from the Solent with George, we visited some of my favourite south coast haunts – pictures below:

Yesterday, in early September, was relaunch day (after a few weeks in Baltic Wharf Boatyard, Totnes). With one day of easterly wind, I sailed 14 hours west to Falmouth and, though Henrietta did dance daintily, I really felt tired, achey and a bit decrepit as I carefully anchored in pitch black darkness up a West Country creek. But that’s enough about aches et al; this is just an update on what’s going on with good ship H and skipper M.

Henrietta has some new bits and pieces. If you’re interested, that’s VHF radio, anchor, new batteries, some more stripey cushion covers and a TV and printer and yoghurt maker (thank you, Nigel)…plus a glimmering shiney polished hull and brand new antifouling. (Can’t think that I’ll get round to fitting the TV but it’s sitting there in a remote locker in Amazon’s delivery cardboard box).

I have done a lot of eating and drinking and shopping, and, more important, it’s been an unaccustomed treat to see lots of friends and family, visit London, Cambridge and Berlin plus watchRio Olympic prowess and read newspapers. (A few photos here to summarise) 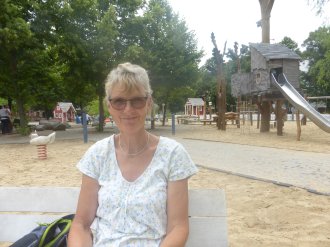 The ‘plan’, for what it’s worth, is to have experts in Falmouth fix some snags (rigging and SSB), then sail east to Solent (boatshow and sociability), then west to Devon (hospital stuff), then, all being well, south to sunshine, before it gets too cold in northern Europe.