It’s a long way across the Atlantic and a lot happens. If you want the full version – the complete works – then skip this bit. But if a summary is enough then here’s a brief version.

Very much a tale of two halves: first part, about 1,500 miles, had good wind, confusing swell and heartening progress of around 140-150 miles a day. Second part was slow slow slow, not nearly enough wind (Henrietta is a bit of a lump and, running, likes over 15 knots to keep her sails billowing with any sort of vigour), so, for the last 1,200 miles, at times we crept along at under 3 knots (that’s an average sort of walking speed…just imagine walking across the Atlantic!). Damage? First part saw broken Hydrovane rudder shaft (which is serious trouble) and half solar panels fail (which is moderate trouble), and cauliflower going rotten (which is smelly trouble) and skipper mildly injured and on painkillers, so by the time we were half way I was super tired and starting to plan life as an OAP in rural Devon, thinking of warm log fires, a country walk, a glass of red wine and maybe a pair of slippers.

Last walk for a while

Crossing this ocean east to west from Cape Verde islands about this time last year, in January 2016, I couldn’t think where the time had gone. The 15 days it took just seemed to whizz past and afterwards, if people asked “What did you do?”, I couldn’t really answer, except saying I’d been pretty busy. I was busy too but, if you’re single-handed, of course you don’t have anyone to back up and verify your tales of industrious bizzyness, and also you aren’t spending lots of time discussing things, great and small, or agreeing what to do or when to eat, or all those other things that couples or groups of friends may do. The solo sailor just stews such matters around in his or her head, does more daydreaming and fantasising, and then does it.

Anyway, this time I kept a more complete diary to note what happens – at least until I got too tired to be bothered. This is perhaps more for my interest than yours; I don’t like to have too many chunks of life just disappearing without explanation. It suggests idleness and goes against what we’re taught and have wired into us with all that Calvinist/Protestant stuff. And, because my own personal wiring makes me naturally lazy, I’ve been prone to too much guilt and so nowadays try to reduce the time spent just blatantly doing totally absolutely nothing. It’s wearisome – but that’s another story.

Before leaving La Gomera and facing a few weeks of no shops, no alcohol, no people and no serious puffing exercise, I almost overdosed on all of them. Apart from the shops bit, I knew I’d miss the others, especially the people. So on my last Gomera mountain walk I picked up some fellow walkers, first three Swedish ladies, then a Dutch couple, and added to a Scottish couple from neighbouring yacht, enjoyed an afternoon and evening of chat and drink. I think it’s nice for non-sailors to see the inside of a sailing boat, and Dutch and Swedish walkers seemed intrigued that any normal person would want to live in a little boat. Also, as a result of the Brexit business, (sorry to bring it up again!), I’ve been trying to inform every EU person I meet that I was out of line with my voting countrymen, and in fact I have only a few friends who were mistaken in wanting to exit. Britain, I arrogantly suggest, made a barmy decision based on the half-truths, self-interests, inflated egos and distorted press coverage of a nation trying to find a scapegoat (in this case ‘Brussels’) for the fact that it felt it was going down the plughole. (In truth, we were nowhere near a plughole – though may now be spiralling slowly towards one). There is a fairly popular European view, if not the informed political one, that Britain has always been a pain in the arse of the EU, and we may as well go our own way and behave like a self-centred brat if we want. Good riddance some of our European neighbours say! It’s too depressing for words.

Oh dear, here we go…drifting off the sailing stuff again…

In fact, the more time I spent in La Gomera, one of the last civilised outposts of probably the most civilised continent on earth, the less inclined I felt to leave. Don’t ask me why I did. I don’t really know.

But, I did. Weighed down and lockers bursting with masses of fresh fruit and veg, and freshwater tanks filled, and with wind forecast ok, I left…..

Then, 21 days (and nights) and some 2,700 nautical miles later, I sailed into Martinique, which is a French outpost territory in the Eastern Caribbean. (I’m still clinging to Europe you see!)

What did I do while Henrietta worked mightily carrying me across? Well, you may not believe me, but it is quite hard work. If you haven’t sailed an ocean, you first have to imagine the constant rolling motion of a boat running before the wind in an irregular two to five metre swell, wind for the first half seldom less than F.5/6. “Rolling” implies some sort of soothing rocking movement, but it’s not like that; it’s unpredictable, sometimes wild and lurching, sometimes beguilingly steady for a few seconds. If not sitting down you have to hold on almost all the time with at least one hand. Just as you think a pattern of regular rolls is happening, and you’re about to do a two-handed task, like chopping vegetables say or joining two bits of wire, a violent roll comes along, and you’re back to one hand. So, everything is done slowly and can take ages, particularly everyday chores like cooking and sail changing and repair work. And at night, sleep is disturbed of course. But never mind, we think we do it because we want to; and it is, I assure you, a lovely way to see a huge inky blue ocean and trade wind skies and magical dark starlit nights. Though as time goes by, I fondly imagine the sheer delight of a stable bed, an armchair in front of a good film, a warm shower and eating off  a china plate instead of a plastic bowl. But know that’s ‘grass is greener’ thinking. In another time,in a place not far from here, we might after all have been shackled slaves suffering unimaginable horrors in the bowels of a trading vessel.

So what happens? Here’s a typical day taken from my diary (abridged): “dawn getting later, but still on UT [GMT] so having tea in the dark at 8am, just under 2,000 miles to go, into tropics now but not very warm, no flying fish yet. Last night, joy: while below, heard squeaks, found I was racing along with pod of playful dolphins, sang and called to them, which I think they like, they stayed half an hour (will never tire of the happy feelings that come with meeting sealife. Two days earlier a huge whale, at least 20 metres, surfaced with that loud base grunting blast as it spouted nearby – just how you’d imagine an ogre would grunt/puff if it surfaced after swimming ten lengths of the swimming pool underwater.) First long-tailed tropic bird appeared later and fluttered around for an hour before flapping away to the south (they look too fragile for mid-ocean life). Started new book, (Kate Atkinson’s “A God in Ruins”); on to lesson 5 of Spanish course (albeit a bit late now I’ve left Spanish territory) but fell asleep mid-lesson, thorough all-over wash (cleanliness next to Godliness and all that), oh no! Main solar panels failed again, spend over three hours with multimeter and screwdrivers trying to fix, without success but bruised arms, hurt back and cut hand, genoa reefed/unreefed repeatedly, cook (chilli con carne, without the carne), clean, wash-up, tidy up…now it’s dark already, brush teeth, wash face, fret about solar panels and very rolly so hopeless sleep, and read Kate Atkinson instead, eat codeine pills (and write this)….”.

That’s it. A more-or-less typical day.

A day later, the rudder shaft of Hydrovane snapped. It didn’t hit anything but I guess endless stresses led to fatigue. (For non-boaty people, Hydrovane is the wind-powered self-steering device that keeps me on course). I’d sensed its slow responsiveness, went to stern to investigate (very very rolly seas) and was horrified to see the rudder shaft bent. It’s a 30mm heavyweight stainless steel rod. While considering options, it – this super-strong s/s shaft – snapped and rudder broke away, dragged along like a demented great fish on its tether. Luckily I retrieved the rudder, did lots of other boaty things, and had a cup of tea. …and….for the next 1,400 miles the autohelm (electric self-steering system) just about managed. But, as it has an old-age knack of periodically stopping, there were few periods of rest.

Between tending to steering, adjusting sails, cooking, washing, cleaning, miscellaneous chores and other discernible spells of activity, there’s an awful lot of thinking and day-dreaming and half-hearted planning. It’s all a lot like life on land for dirt-dwellers really. It’s just that there are no people here, just a wonderful overarching sky and endless empty mighty deep-blue ocean. Oh! And there’s no telly, no phone, no shops, no human, no news and no internet. (And these last must fill a big chunk of most modern people’s lives.)

And I can confirm, as I did last year, that the Atlantic Ocean is not a pond; and it’s really ever so silly to say ‘pond’. How would a hippopotamus feel if you called it a water vole – just think?

And another question I’ve been asked by fellow European sailor (and I’d like an answer to this one): Why is so much in Britain referred to as ‘Royal’? Not just the Royal Family (they’re almost univerally applauded), but yacht clubs, agricultural shows, chinaware, even a few towns, a Cruising Club, an Automobile Club and all sorts of other things. Plenty of other countries have monarchs but they don’t get carried away with the Royal stuff like Britain does. Is it just because we’re so obsessively stuck in the 19th century or snobbish, and consider a Royal pre-fix adds cache – a nation, not of shopkeepers but old-fashioned status-seeking snobs? …Answers please?

So that’s it. I have no idea what comes next. In theory, there’s the Pacific, Europe, East Coast USA, or staying here in the Caribbean to choose from. While weary, aching and awaiting spare parts to fix Henrietta, I dream about that log fire in rural Devon. (Haven’t had any slippers since school days  and know I don’t really want any now!).I suspect my stamina has ebbed to a new low and wonder if it may recover. Oh! But I’m enjoying lots of swimming, and French Caribbean bread and wine from Bordeaux, and other people’s company. 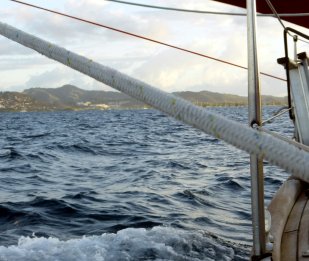 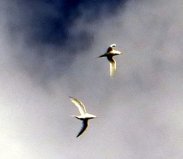