“Henrietta” and I have waited in Shelter Bay marina, on the Caribbean side of Panama, for a week already. The queue for yachts to transit the Panama Canal seems to be three to four weeks at the moment with usually just two or three boats going a day, sandwiched between a constant stream of big ships moving through 24 hours a day, every day and night of the year. (As a yacht you do pay a lot to use the canal but ships pay tens or hundreds of thousands dollars each, so they understandably have priority. They’re the mainstay of the Panamanian economy!)

Looking on the bright side, my agent Erick and assistant Peter have been efficient; Henrietta has been measured by the Canal Authority admeasurer; and I – or rather the good ship Henrietta – has a number, and I’ve signed lots of papers and paid the fees. (All feels a bit like Charlie’s Golden Ticket!)

..and his assistant, Peter 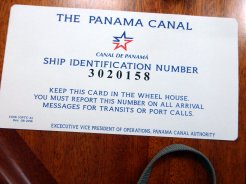 And I’ve been to Colon a couple of times to shop and get a stamp in the passport. Colon is not a pretty spot; it needs a good tidy up and, in contrast to Panama City, which is a fine city on the Pacific side of Panama, Colon is too full of crime for comfort.

Busride from marina to Colon

across the canal as ship sits in Gatun lock 1

The marina is about an hour’s bus ride from Colon – nearer two hours if the canal lock gates are open for ships to pass, when the bus crosses by ferry. Because it’s a bit isolated, good organising boaty folk manage a schedule of ‘things-to-do’ (when we’re not working on boats, chatting, reading and so on); i.e. yoga, walks, aquafit, films and games and suchlike, and as nearly every boat is either waiting to go to the Pacific or just arrived from the Pacific, there’s lots of international sociability. And of course there’s a bar and restaurant, and swimming pool. We don’t swim in the marina; water’s a bit grubby and crocodiles live here (one cruised up between the pontoons yesterday!)

Marina’s next to erstwhile US Naval base, now rapidly being gobbled up by…

But Henrietta and I quickly grow tired of marinas so plan to leave here soon and sail to other bits of Panama while we await our turn to go to the Pacific, probably at the end of April.

One response to “Waiting in Panama”