Indonesia, as you probably already know, is a vast country, fourth most populous in the world, largest Islamic country in the world, largest archipelago in the world. There are at least 16,000 isles that stretch about 2,700 miles east to west, and cover about two million square miles. Over the next three months we’ll see a tiny fraction of these.

The entry port for us is Debut in the Kai Islands. It’s a very small town, not normally an entry port, and officials have arrived en masse with cameras and paperwork to clear us in. All very civil and friendly and, to my eyes, muddled, but within a day, they’ve boarded Henrietta, we’ve copied enough papers to fill a filing cabinet, and we’re legal (I think).

The Rally welcome has been staggeringly friendly and lavish, and I shan’t dwell on details. Suffice to say, we’ve sat through many speeches, been photographed enough to make Kate Winslet blush (even drones are sent buzzing aloft to give full coverage). And every time we dinghy ashore, a lively crowd of young children rush enthusiastically to the slippery muddy steps to pull us in.

There have been visits to villages for dancing (that’s a mix of traditional local dances and Westerners wobbling around to Indo-pop music), and at least two fabulous buffets of local dishes, heavily influenced by the fish that form an important part of the local economy. 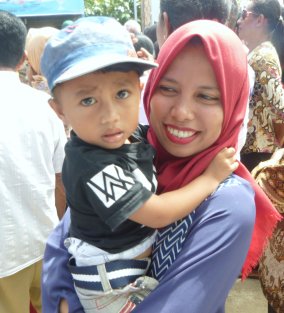 Why do they welcome us with such generous hospitality and friendliness? I think it’s mainly because Indonesians for the most part are loving, friendly, generous people; but also, we’re often told, so that we spread the word and encourage others to visit. We were told that apart from the 40 odd boats that check into the Kai islands for this rally, there are only about 20 others for the whole year. Yacht facilities are limited (which suits me fine) but there are banks, market and supermarket, hotels, and dodgy diesel, and lots of taxis in the capital, Tual.

Since I was last in Indonesia, nearly 40 years ago, a lot has changed. Most little villages seem to have some electricity and piped water, motorbikes scurry everywhere on the larger islands, the Country’s population has gone up about 100 million. And the currency, the rupiah, is issued in millions;  I used to get about 1,400 to the pound, now it’s nearer 18,000. But my initial view is that people’s warm open welcoming inquisitive nature has changed little.

Slides of Some wonderful local food

It is humbling to experience such open-hearted generous hospitality

One response to “Indonesia – SE Mollucca”