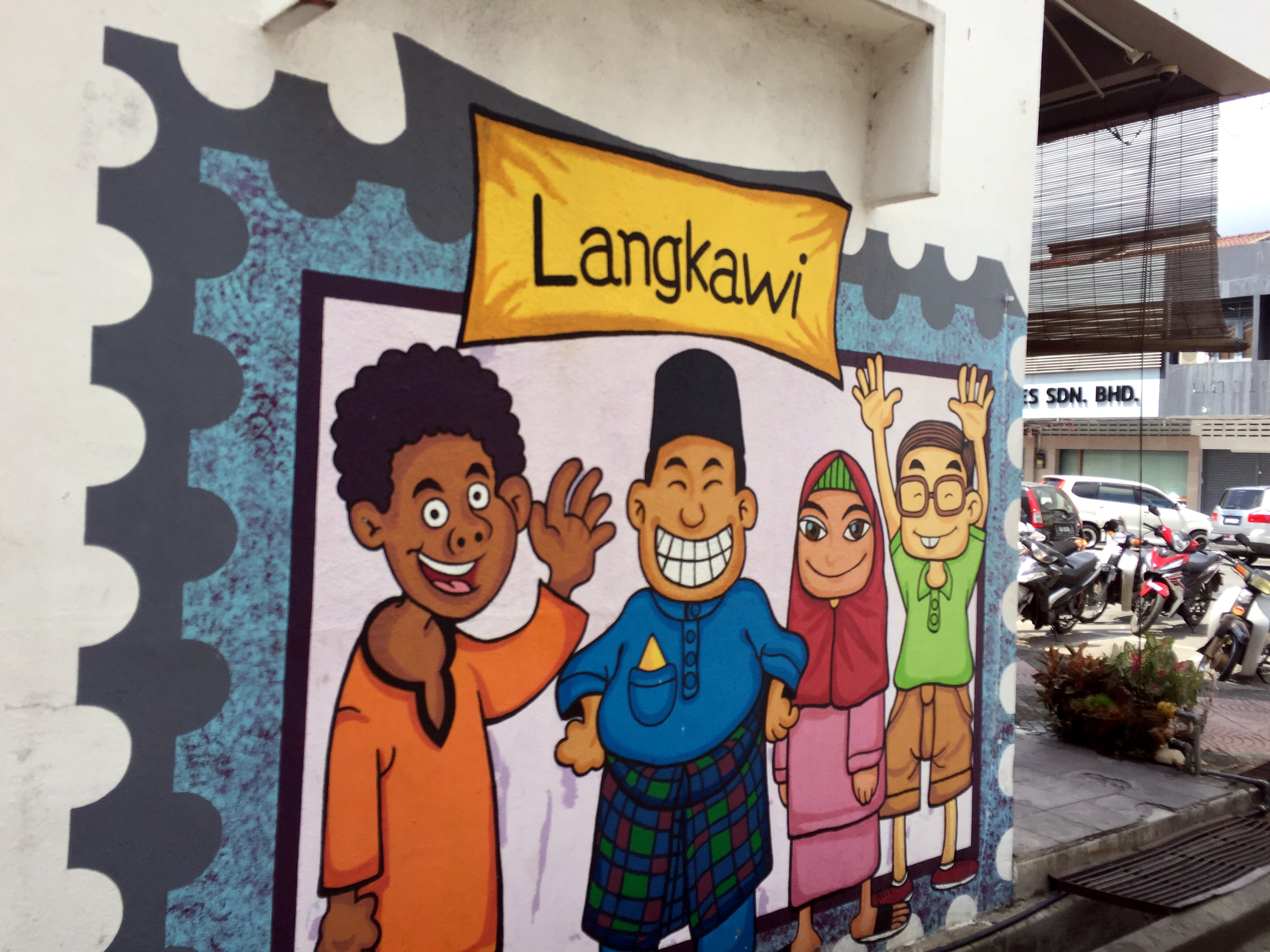 A rather overwhelmingly busy month, of the best kind. You don’t want to know all about it. Even if you think you do you won’t.

So I’ll just touch on some titbits of NW Malaysia and Cambodia.

With newly modified body parts, viz. eyes minus cataracts (after 60 years with glasses it’s magic without), nose (minus unwanted bit), teeth (a few added) I can keep going forever. (It brings to mind a silly and rather rude little schoolboy rhyme that went something like:

Walking down to Uncle Jim…’.

…Chin and Jim are fine by the way.)

Ah yes, I sailed north from Penang to Langkawi (to order new sails, Henrietta’s wardrobe now in a worn out state is deemed unfit for blowy oceans ahead). Langkawi also plays host to several fine friends and it was very good to see them again, and Armelle came to stay and it was very good to see her again. All this around Chinese New Year. So in the morning we tossed food in the air with giant chopsticks (for good luck, great fortunes, health etc) and in the evening had a banquet.

Armelle and I spent a few days with rented motorcycle on Langkawi (an island that’s fine in its messily developed way but, in my view, overrated as a tourist destination) and we at last managed a mountain walk without getting lost, up Gunung Mat Chinchang, a very steep sweaty scramble up 700 metres (yes, you’ll need your hands much of the way).

This takes you higher than the popular cable car/gondolas that might swing you sweat-free to the top of an adjacent peak, but doesn’t give the smug sense of one-upness you get by walking. As there were ropes most of the way it was difficult even for us to get lost.

Joining a crowd of Chinese tourists for the Ecological Organic Fruit Farm tour (forget it’s real title) next day was an eye opener on quintessential Chinese tripper trips but start-to-finish dreadful – ‘nil pointes’, as you’d say for an appalling Eurovision song. Cannot and will never know what’s in the minds of face-masked Chinese tourists, but we tag along obediently.

We then sail back south. Next stop 60 miles south, Penang again.

Another hill walk where Armelle and I do get lost. Rather, we don’t get lost but the path on the map ended abruptly at a very high security fence. We crawl underneath with hungry mosquitoes rapidly draining our tasty European blood and find ourselves in Penang’s largest adventure park (I think that’s what it said in the brochure) with the world’s longest water slide – over 1 km (which is what Guinness Book of Records says). Security staff spot us in no time, say we shouldn’t be there. We do know we’ve been naughty so look contrite. Staff promptly stick us on the chair lift to glide serenely back over the tree tops and down the mountain. And kindly firmly guide us to the exit.

We walk a well worn path through the shade of tropical forest in the Penang National Park instead – and don’t get lost.

And after all that we treat ourselves to Snowy Ice Mountain puddings, sometimes called ABCs (air batu campur) – these probably the best in the entire country!

Armelle left from Penang. I’ll miss her energy, allure and colourful temperament (but seasickness can be a seriously troublesome beast). I’ve learnt something of the utter predictability and pathetically shallow dignity of the male of the species (myself included) when confronted with intelligent mischievous wide-eyed, long-legged Gallic flirtatiousness, all with the figure of Aphrodite. Ridiculous.

And so I sail another 70 miles or so south to Pangkor, and the friendly and beautifully managed boatyard that is Pangkor’s prime attraction for yachtsfolk .

Henrietta is due for some work that I can only do on land.

So she is lifted out of the water ….and I go to Cambodia

Sometimes it’s good to try out a little bit of life on land.

Cambodia has over 16 million people and is the poorest country in Southeast Asia, its GDP per capita a quarter that of Thailand’s. It is overwhelmingly Buddhist and yet has a history that within my lifetime has seen as much horror, bloodshed and pain as anywhere on earth. In quickly reading something of the Country’s history and politics, I find also that it ranks second to bottom in the world for the Rule of Law, read here if you want more.

Yet I, as a comfortable western traveller, loved the little I saw of Cambodia, fascinating, energetic, industrious, proud and very thought-provoking. I simply ‘did’ some standard hasty tourist sightseeing of Phnom Penh and Siem Reap.

You first need to find out how to spell Phnom Penh. Then you can go there.

Once there you are in one of the most chaotic, curious and extraordinary capitals of Southeast Asia.

This is where Cambodians seem somehow to retain relics of French colonial buildings, Buddhist temples, and a scattering of skyscrapers, among poor crumbling local shacks, all plonked in a grid network of pot-holed, litter-strewn hot dusty streets that are constantly crisscrossed with anarchic tuk-tuk, motorcycles, cars and trucks. People jostle boldly with traffic and at their peril, pedestrians a poor last in terms of street space (although I gather the rule is that whenever there’s an accident, and there are many, the larger vehicle is always ‘in the wrong’).

Next on the tourism list is the horribly atmospheric Tuol Sleng Genocide Museum, S-21, one of the Khmer Rouge detention and torture centres; and then Choeung Ek ‘Killing Fields’, one of many where in total a quarter of the country’s population were murdered and buried between 1975 and 1979 under Pol Pot’s regime of terror. You’d be a very insensitive and amoral soul were you not to be moved by such vivid memorials. 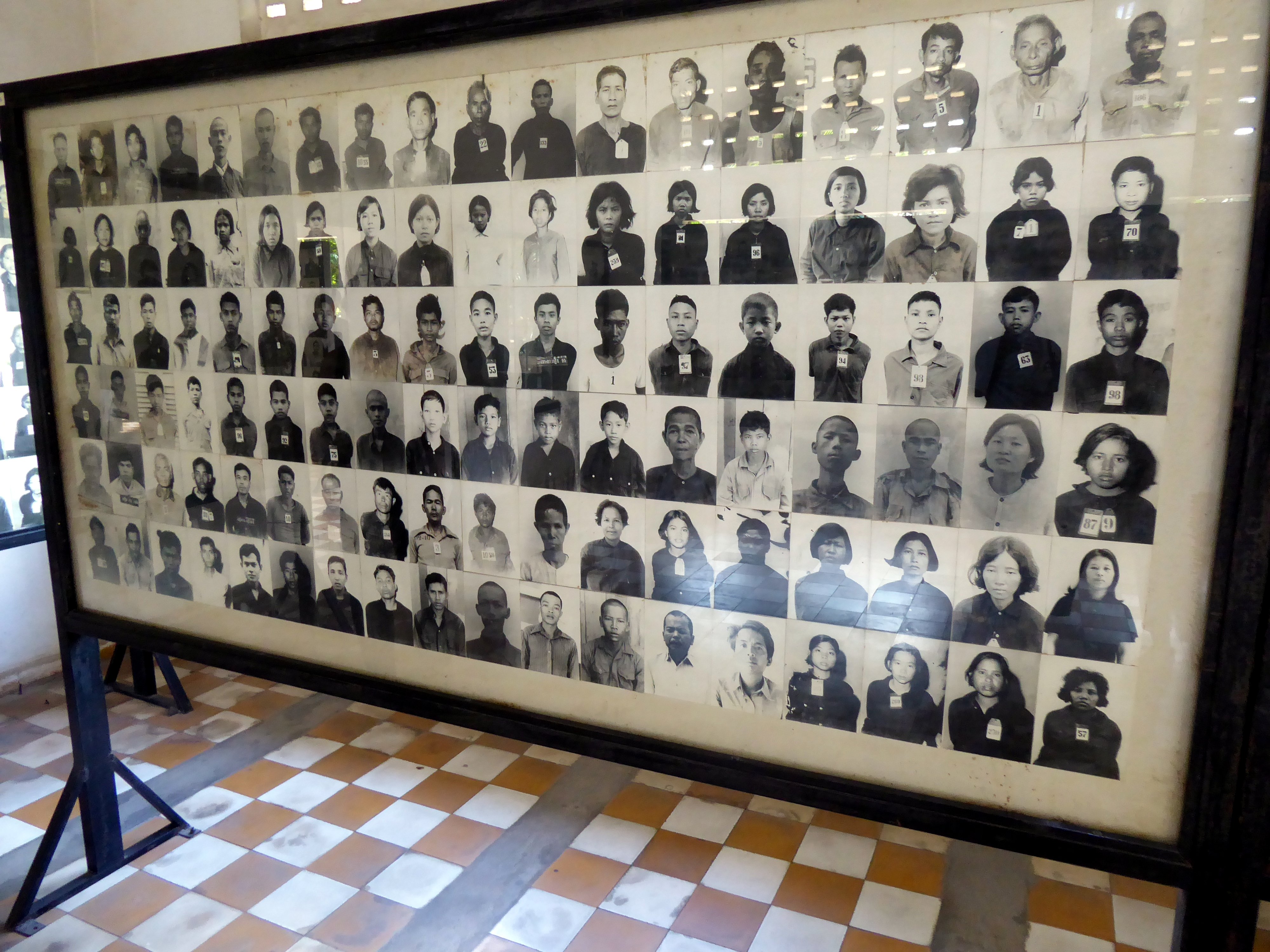 It was Valentines Day which of course I’d forgotten, and it is bittersweet irony that I shared that gruesome trip in a minibus with nine cheery young women staying in my hostel. None of us had a candlelit dinner that evening. A Valentines Day to remember.

Next day, (oh dear! This is getting to be another tedious travelogue), I hire a bicycle and join a small group to chance our luck on Phnom Penh’s backstreets, take ferries across the Mekong and meander along rural lanes to silk farm and fruit orchards.

Next thing….this is easy…I do what most ‘young’ travellers do….I take a bus for the six hour trip to Siem Reap…find a cheap and convenient hostel….and then after brief sleep, get up well before dawn to visit Angkor Wat and other temples.

Angkor is, according to UNESCO, the world’s largest religious monument. It covers 163 hectares. The most visited temple is Angkor Wat itself and over two million people come every year; most of them it seemed on the same day as me.

Walking briskly over the floating causeway to Angkor Wat in the cool pre-dawn light you feel you’re part of a massive excited crowd herding to a premiership football match. Others can tell you of the history and scale and marvellous detail of this fabulous temple, and other temples nearby. 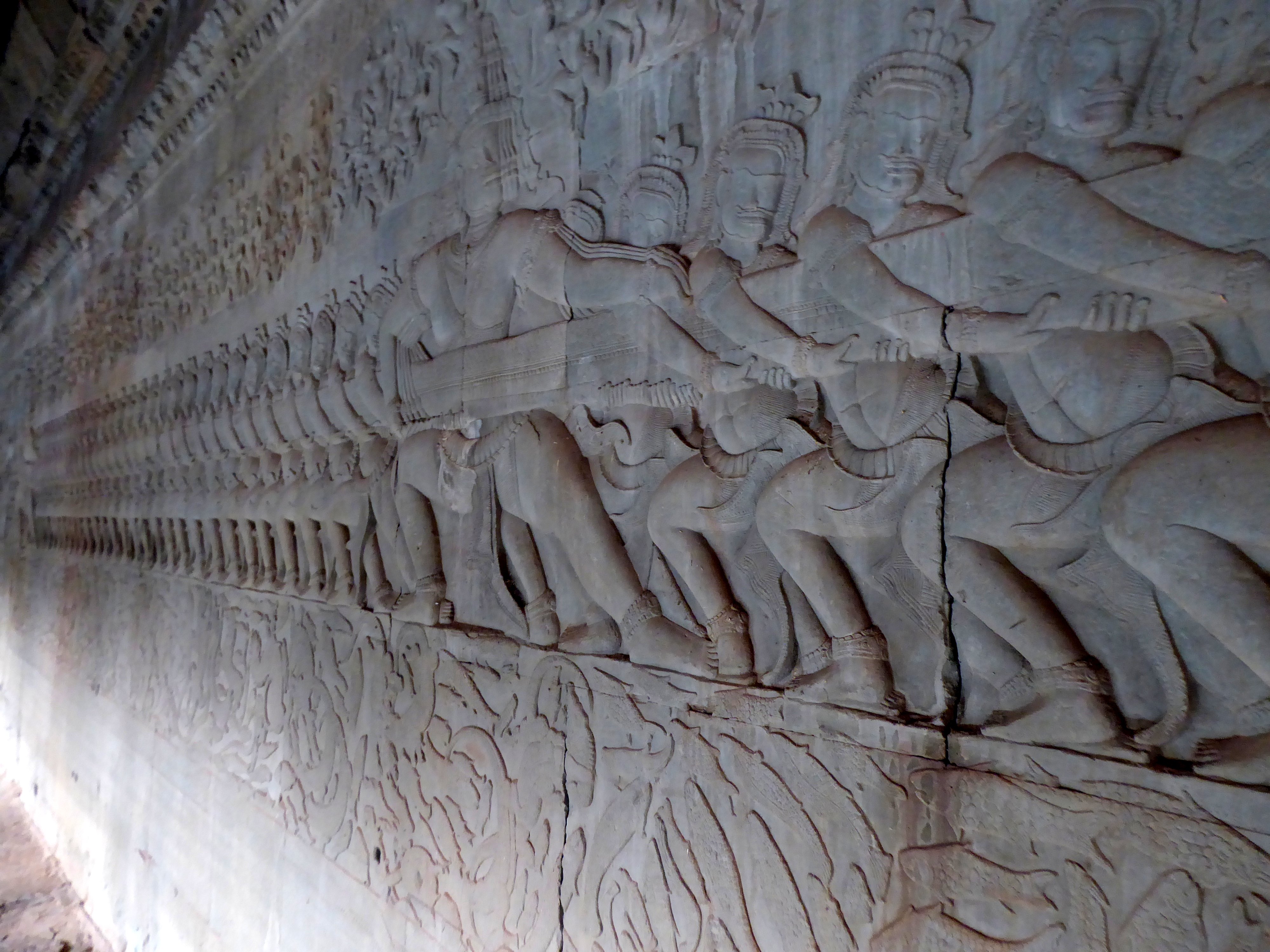 For me it was wonderful and I enjoyed the entire hot day ambling among the ruins, some restored most not, of this huge peaceful area, largely lost in drowsy daydreams, a tuk-tuk to help travel between the many sites. 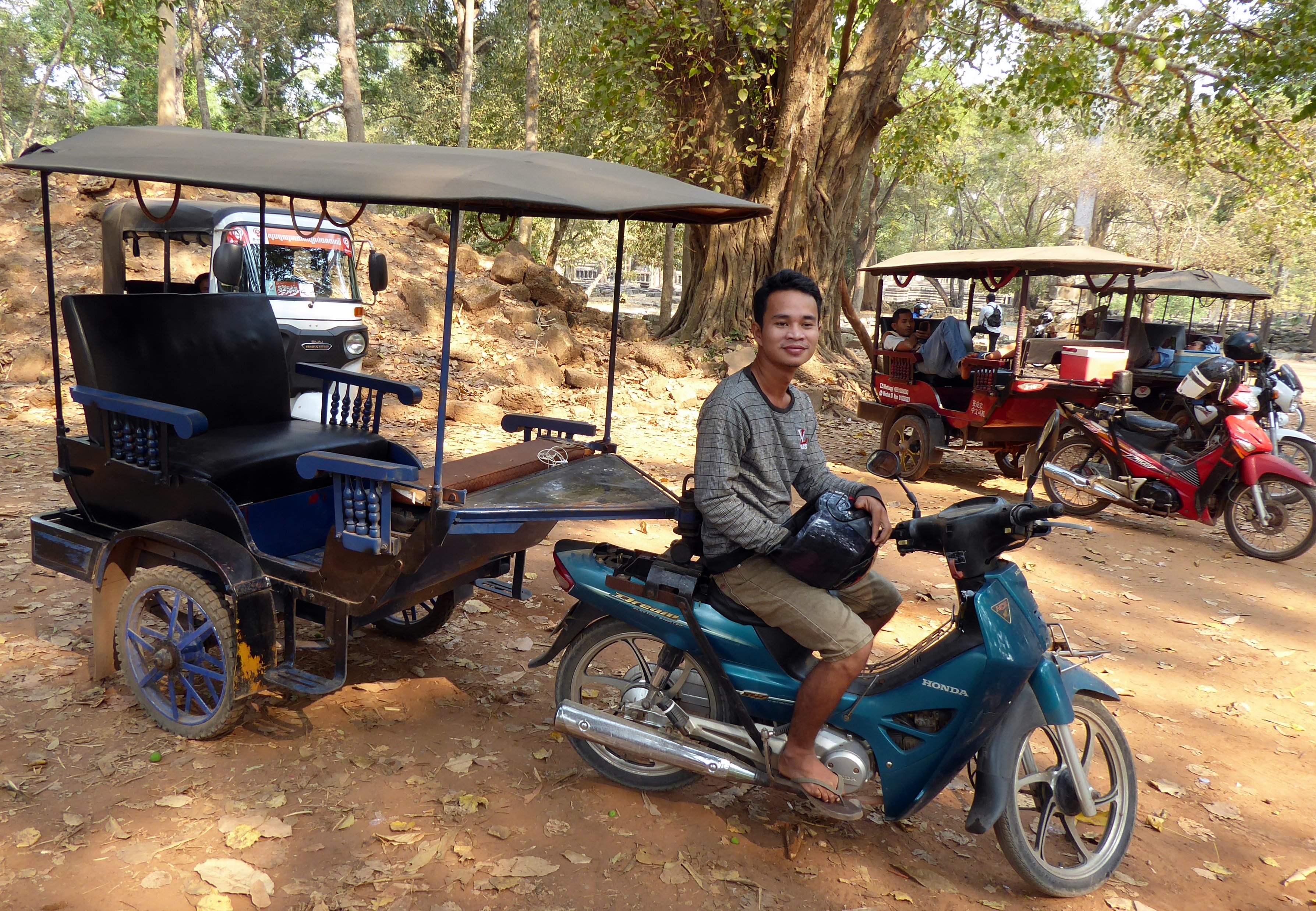 We are reminded whilst here of recent and current Cambodian life with landmine victims who play their timeless Khmer music at the entrances to some of the temples, ill-fitting prosthetic limbs and crutches propped beside them. Sadly the country has an appalling number of limbless people, dreadfully hurt by the indiscriminate murderous landmines.

I head back to Pangkor and my home, Henrietta, a quick detour by public transport to Penang on the way (need another Indonesian visa). There’s a lot to do but I’ve enjoyed a stimulating break and holiday from life afloat. Ah! It was especially nice to sleep in a proper bed in Cambodia’s hostels – with air conditioning too. The heat aboard boatyarded Henrietta could readily cook meringues. Boat life can sometimes seem austere. It just suits me better than other ways of life – most of the time. (Sorry folks! I seem to have rambled on with this blog update for a lot longer than intended – too lazy to cut it down.)

3 responses to “Northwest Malaysia and Cambodia”