(Only writing this update because it’s pouring with cats-and-dogs type tropical rain. Being a bit whimpy, I’ve decided to stay aboard and not wander the mountains of Dominica.)

First just look at this photo:

It is the most amazing little bug, a fabulous tiny bit of beatle nature – even if the photo is not too good. Why amazing? Because it has a flashing light on its bottom. It really does. A bright and insistent little beacon on its bum! I was sitting peacefully in the cockpit the other night, sipping rum and admiring the stars and watching peaceful boats rocking on their moorings, when suddenly I spotted a little flashing light right in front of me. I blinked and blinked again, thinking I might have overdone the rum….. then realised it was some sort of lightning bug (they’re not that unusual!). Took this photo.

Leaving science aside, it is exciting beyond words to come across such gems of nature when they’re not expected. To meet a turtle in the sea in a popular turtle-watching spot is one thing, but it’s so much more marvellous when you come across one unexpectedly, in a place where they’re not talked of – as happened off St Pierre a few days ago, where one lingered swimming with me for ages – magic moments!

Thinking of lights, I want to tell you about a cruise ship which passed the other night, when I was sailing from Trinidad towards Martinique. (Cruise ships are forever scurrying back and forth overnight, ensuring their passengers reach the next Caribbean port-of-call around breakfast time.) This particular one, “Celebrity Summit”, on its way to Barbados, about two o’clock in the morning, was going to pass a mile or so away and I’d not have been concerned except it seemed to be flashing search lights at the sea and sky (and me). I called them on the radio to ask if there was a problem….”No problem, sir; they are having a party.” I gather it was a laser light display, stabbing bright coloured beams into the sky and everywhere else, presumably while night-owl passengers bopped away on the outside top deck. It does add variety to the night watch to have such incidents. But Nelson would have turned in his grave.

Days pass quickly. I’ve enjoyed Martinique and can’t think where the time went. It’s been good, as ever, to meet new sailing folk on the way, especially, at last, the crew of Baloo, another yacht from SW England. (I guess four out of every five British boats are from Devon or Cornwall. No wonder those counties are so sparsely populated. Everyone’s away on a boat.)…it’s still pouring with rain…..

Here are some pictures of local sailing racing off Fort de France (Martinique’s capital). It’s clearly a dramatic business with crew leaping in and out on loglike ‘sliding’ seats, frequent capsizes etc. We had our hearts in our mouths as they raced through our anchorage.

Just as the unexpected gems of the natural world are the most exciting, so too the gems of the man-made world. Anyway, the little new town of St Pierre on Martinique was, for me, a bit special and exciting. It’s the rebuilt town, now quite small, that replaces the ‘Paris of the Caribbean’ town, pop. 30,000, which was incinerated in a volcanic fireball in 1902, killing almost everyone and sinking the ships at anchor offshore. (A tiny museum recounts the event with a series of appalling photos). St Pierre nowadays has a charming sea frontage where luxuriant jungle foliage blends with higgledy-piggledy buildings bordering a dark grey sandy beach. There’s an appealing mix of French chic and Caribbean shabby. It was there I met my friendly turtle. And also spoilt myself with fine 15 euro plat du jour in a little restaurant (tablecloth and two wine glasses each). The couple who owned and ran it had met here and have settled. He cooked like a Michelin chef; she waited with friendly charm and the husky French accent of the inveterate smoker.

From St Pierre, it was about 50 miles north here to Portsmouth, Dominica – another day, another country, another new courtesy flag. I arrived a couple of days ago, did the Indian River trip yesterday – a standard tourist outing, but very worthwhile and enriched for me more by the French couple who were with me and our guide, ‘James Bond’ (more to do with his girl reputation rather than daring-do), than by the knowledge that Johnny Depp and Keira Knightly were here too (filming one or other of the Pirates of the Caribbean films). Here are some photos. 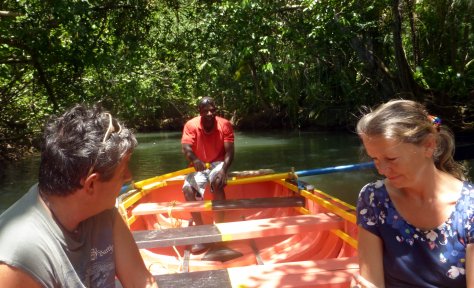 I’ll cut this short as the rain has stopped and I’ll head off and go to be a tourist .

One thought on “North from Martinique”