Delayed much longer than planned in Martinique meant I sadly missed revisiting islands further north or south, where I’d planned to meet sailor friends from last year. Nearly three weeks in Martinique; it took that long to get new Hydrovane stuff from England and fit it. Satisfying though to have it working again. Another little bit is still needed to achieve perfection and is being sent to Panama.

While on the subject of help and efficiency, I thank all the fellow sailors who helped me and Henrietta in and out of the boatyard maintenance pontoon at Le Marin. If you have tried reversing a hefferlump yacht stern to a pontoon, picking up two buoys for bow on the way in, plus getting two lines ashore for the stern, in strong gusting crosswinds, without sinking neighbouring boats etc, you’ll know it’s not a single-handed job! In the event I think about seven folk helped me in, and two helped me out including kind amateur tugmen in their inflatable tenders. No wonder I prefer anchoring.

The maintenance pontoon in Le Marin has perhaps a dozen boats at any one time. It’s one of the busiest sweatiest place I’ve ever been. From dawn to after dusk: welding sparks fly, angle grinders whine, sanding, banging, grunting, multilingual cursing; and smells of glues, resins and paints. It was  a relief to leave, though I’d appreciated the company and easy access to chandleries and shops, and I had to be very close to pontoon to replace vane rudder shaft.

To finish off on a review of work done in Martinique, Marco (a delightful unflappable and gymnastic electrician ex-Parisian  liveaboard …” came here many years ago, work enough for money for sailing…”) helped me remove solar panels, solder bits..now all fixed…Tilikum (Victron agent) and Frederic, another French exile c. 25 years since sailing here, brilliant in replacing regulator….Jacques, yet another liveaboard Frenchman now heading back to Greece and with more links to LA than France, kind and knowledgeable for Hydrovane assistance….Unnamed (but with infuriating French charm) electronics outfit, hopeless with fixing SSB radio (indeed, much worse than useless as it now does not transmit at all!….I give a heartfelt weary Gallic shrug and mutter a rude French word. I’ll go without SSB transmit capability. But I successfully fixed most of the items on my ‘to do’ list.

Through Ocean Cruising Club (OCC) – as much a social club as a sailing one in the Caribbean – I was happy to meet new and old faces. (Strictly speaking we’re all old rather than new, but you know what I mean). And I found some of the Six Nations Rugby was on telly.

A day sail then 30 miles up the coast of Martinique to old capital, St Pierre – obliterated by volcanic eruption (which I told you about when there last year. See last year’s post if you want). It’s one of my favourite little Caribbean towns; pretty, unhurried, hospitable and altogether charming.

Pretty, even in the rain

Then, desperately needing the stimulus and challenge of somewhere new, I sailed the 450 miles over to Bonaire.

Arrived three and a half days later in darkness and, after exasperatingly long time found a vacant mooring buoy (to help preserve the coral, no anchoring is allowed), drank a tin of beer and went to bed. (It is not easy to find a little mooring buoy in the dark, let alone tie up to it – on your own!) Next morning I find glorious crystal clear water all around, swim with pretty tropical fishes and check the mooring.

If you haven’t heard of Bonaire, then until a year ago, I hadn’t either. Bonaire is the ‘B’ of the ABC islands, Dutch Antilles, off the coast of Venezuela. (The A is Aruba, the C is Curacaou).

(Images from Bonaire. The pretty yacht is “Little Coconut” last seen in Madeira!) 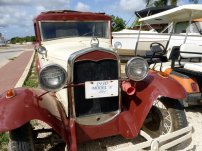 Bonaire has about 16,000 people, nearly half are Dutch. (cf. The two cruise ships here yesterday and the two today have over 11,000 passengers between them, and they’re each over four times higher than the highest building on the island! There’s only just room to squeaze them in and pilots are superhumanly skillful at parking!)

It’s flat here – like most of Holland, I suppose. People come here to dive, and if you’re a diving buff, I gather it’s in the top ten of the world’s best spots. “Many more dive shops than bakeries” I was told, and it’s true. Languages give a clue to Bonaire’s history. Officially they are Papiamento (itself a blend of every language you’ve ever heard), plus Dutch, English and Spanish. Residents seem to slip effortlessly from one language to any other in a trice, and always make an Englishman feel especially humble and hopeless. I should add that the music is more engaging than I came across in Eastern Caribbean (where, apart from a rare good steel band, it’s mainly poppy sloppy pap), and the place is very very relaxed. As a Dutch Territory, it’s clean and tidy, people polite, direct and moderately efficient.

So anyway, now I’m here, I’m going to learn to dive. This will mean a stay of another week. I really don’t know what to do next. I want to see Colombia and San Blas islands. But Panama is still nearly 800 miles away and I’m late for the Pacific, both late in the season, and late in life. And I ache and feel mighty tired as well! Plus I recognise we can never see all the wonders of our amazing planet, so maybe north to Jamaica and Cuba is a better bet.

One response to “Martinique and Bonaire”