Henrietta can write this bit of blog. I’m tired.

H: The trouble with Michael is that he’s just a human being, just a plonker human bean. Not homo sapiens, more like homo plonkus. He has all these feelings and thoughts and human stuff. He gets moods of despondency and melancholic glumness. And when we sailed one of our demanding nights the other night, fickle wind and lumpy bumpy seas, and there was a lot of reefing and unreefing, and altering course and other boats on the sea that he had to watch, and then his chickpea and veg and saucepan jumped out of the gimballed stove making a very dreadful mess, he got a bit frazzled and I heard him groaning and grunting a lot, and saying things, and his muscles ached. (And personally, I think he sometimes thinks he’s getting a bit old).

Anyhow, I can see the advantages of being a sailing boat: – none of this emotional stuff or feeling sad or gloomy or cold or tired. Humans: homo sapiens, a miracle of creation. Nonsense! That’s me – pure beautiful functional plastic sailing boat: boatus miraculus.

Luckily, most sailors are optimistic. They’re pretty stubborn and often silly too. Otherwise they would have given up sailing ages ago. They need to be optimistic and a bit stubborn/determined. They’re always believing that tomorrow will be better – not just better breeze and sea and sunshine either; they also believe that tomorrow, nothing on the boat will break or wear out, and it wil be better with other experiences – experience of interest or happiness or music or exotic food or wondrous scenery or marvellous sea-life or amazing other people.

M has a severe case of sailor optimism. He’s a romantic optimist. That’s the worst sort. Us boats, we know life doesn’t always work out. We’re pure fatalists and know we’re just here to suffer most of the time. Groan!

You may not want to read all this stuff…so. Where have we been and what has happened?

After Anna left Madeira, we had a gentle enough sail down to Lanzarote. Rude people used to call this island Landzagrotty. But we liked it. Arrecife, the capital, has a big, shiny, newish marina with lots of polished stainless steel, big glass-fronted fashion shops and restaurants. Best of all for me (though I don’t think M liked it so much) was piped music coming from speakers all over the marina frontage playing soppy Christmas music – not proper carols like you used to sing in church or school concerts, but slow modern drippy carols, often sung by girls or children who’d eaten too much honey. And at night there was very loud party beat disco sort of music, and I think a bit of karaoke. (Again I quite like it, but M feels quite ill when he hears karaoke – possibly the most abhorrent Japanese import of all time, he says.)

We missed the little island of Graciosa this time, for reasons too long to explain. It’s the small empty island north of Lanzarote (lovely we’re told), and we’ll have to go back another time.

Coast of a Canary Island?

After Arrecife, we had some rolly-polly nights anchoring on the coasts of Lanzarote and Fuerteventura; then on to Gran Tarajal, at the south of Fuerteventura, and another marina. It has extremely cheap mooring and the town is a low key tourist spot, with a nice beach and Spar supermarket but little discernible night-life. I think M’s highlight there was meeting the amazing Anglo-Australian couple, Chris and Elayne, who built a car (yes, a car…not a boat) and drove it all over the world. Furthermore, Chris is one of the world’s most wonderful story-tellers and one-man entertainers who will enthrall anyone for hours with his tales of adventure. Just have a look at his blogsite http://www.ouradventurebug.com. He and Elayne are now trying sailing. They bought one of those aluminium French boats in Marseille a year ago. “Sell it when we get to Australia and recoup our costs”, Chris says. And we berthed alongside a friendly talkative English couple who had spent years and years and years on their boat in the Canaries, so they were super-knowledgable.

Next after Fuerteventura, we sailed overnight to Gran Canaria’s capital, Las Palmas. It was soon after dawn when we confidently pootled into the giant marina, fenders out and mooring lines ready, only to be told to go away. (And we had radioed ahead but had no reply) It’s the marina from which the ARC fleet of yachts departed a few weeks ago, and M was told there’s always space once they’ve gone. Trouble is that mooring there is so absurdly cheap that boats stay for months, leaving little chance for newcomers. We were told to anchor outside with the 20 other yachts all waiting for a berth in the port. M is short of patience when tired and, rather than hang around for days waiting to berth, we sailed on south to a marina in the south of Gran Canaria – Pasito Blanco.

One day out from the cocoon of the Pasito Blanco marina complex, I know Michael walked along the seashore under the crumbly cliffs, over rocks and boulders, and past enclaves of well-oiled pink people sunning their not-so-private parts, to a nearby holiday resort; a mega-mega-holiday resort with more tourists than you’d think could sensibly be flown in to one island. Sailors tend to avoid these mega resorts. They’re better suited to people who need football on telly, a casino or two, golden beaches, a ‘good time’ and Irish Pubs. And though, the square miles of hotels, conference centres, flesh pots and shopping malls that make up the Maspalomas metropolis are smarter and more upmarket than the equivalent Los Cristianos on Tenerife, the coffee and cakes are still twice the going rate (and pizza cheap as chips), and you come across.endless almost identical restaurants and the supermarkets always have the Sun and Daily Mail. And M gets depressed and is reminded, if he had ever forgotten, that he understands so little of how most of his countrymen, and other north Europeans, live and think and feel. 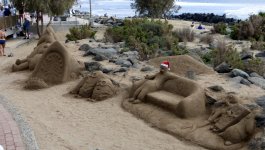 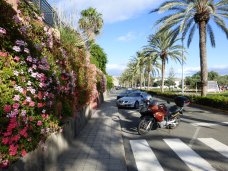 Neat and tidy at Pasito Blanco

We left and sailed, overnight again, to La Gomera. It was a bit trying.

This has been a dreadfully long blog. Bye-bye for now and Happy Christmas from Henrietta.

M: Henrietta wrote that after we arrived in La Gomera a day or two ago. It was a low spot. It’s best that Henrietta writes when I am out of sorts. And I am happy now. This place is a spirit-lifter. It’s a smaller Canary Island, quite near Tenerife.

I’ve been for a couple of leg-stretching walks, and some swims (and had a horrifically drastic haircut – the outcome of my pathetic Spanish and a suspected sadist hairdresser). More next time…..I’ll stay in La Gomera a while. Apart from the hairdresser, I like it here, and my youngest son, George, joins me on Boxing Day.

Here are pictures from La Gomera….

Walking with a new haircut…

3 thoughts on “Some Canary Islands”