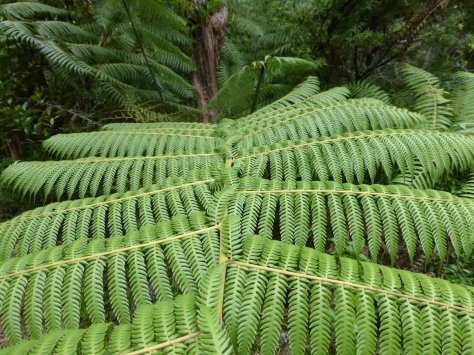 A month of motley experiences with all the wonders, frustrations, challenges, delights, excitements and mysteries of sailing life, including: perhaps my favourite NZ anchorage (in Whangaroa’s big natural harbour), 19 other anchorages, about half a dozen islands, one marina, one storm and one gale, two mountains, three films, many boaty chats and meetings, plenty of sunshine, two ‘pubs’, heavy rain and a haircut.  I’ll just pick a few titbits from the diary and log book.

Today it’s chilly, first time the temperature has hardly reached 15 degrees C all day. Summer’s over and NZ clocks have changed. Jumper and thermals are ready. That haircut in Whitianga (pronounced roughly ‘Fittyunga’) was unnecessary and premature – but a bargain and I liked chatting with barber Sue (“Auckland’s a tip, Tauranga [the city she came from] is a tip, Whitianga” she tells me “is the only place to be”. Sue has inviolate opinions and probably eats too many biscuits, but I liked her).

Whitianga was indeed a useful port of call. Apart from haircut, supermarkets, soulless NZ architecture, best cup of coffee in Southern hemisphere and low cost immaculate marina, there’s not much else – except the Merlin Cinema. (Feeling deprived of films, in two days I saw three: “Darkest Hour”, “The Mercy”, “Finding Your Feet” – the Good, the Bad and the Ugly, not in that order.) There wasn’t much else in Whitianga. But Sue liked it – “lots of hair to cut”.

Going back to a month ago I’d planned to sail to New Zealand’s South Island, about 500 miles down the west coast of North Island. But it never happened. Forecasts never gave an adequate weather offering and I gave up waiting.

Instead enjoyed big natural empty unsullied Whangaroa Harbour; and an arduous slippery muddy walk to the outback settlement of Totara North, one of those places said to be friendly and close-knit but in reality mighty wary of any outsiders – a bit like rural Yorkshire. Totara North’s one watering hole was busy with lunchtime farmers and fishermen, intent on agricultural gossip. There was seven-a-side rugby on video screens and Country and Western dribbling around, and dozens of little laminated notes telling you what you weren’t allowed to do, and a barmaid who, like Sue,  ate too many biscuits but wasn’t as nice…(I’d tell you more but shan’t. I’d have taken a photo but a note said ‘Don’t’). Fish, chips and beer were fine. And I slithered and panted my lonely muddy path back to Henrietta.

Since then, I’ve sailed south to the Hauraki Gulf, plus a week cruising further south.

In case you haven’t heard of the Hauraki Gulf, it’s the area of sea and islands east of Auckland, about 50 miles top to bottom, 40 east to west, with masses of gorgeous islands (Great Barrier Island is the biggest and there are some photos here) and literally hundreds of anchorages. Wikipedia can tell you more.  It reminds me a bit of the North West Scotland coast of Britain except Hauraki has more rounded green tree-cloaked islands than the rugged raw magnificent ones of Scotland, and there are no midges or true lochs and the thermostat is set 20 degrees higher in New Zealand.

Highlights for me included a walk up Mt Hobson (Hirakimata) on Great Barrier Island. It’s about 2,000 ft and should probably be in the Guiness Book of Records for having the greatest number of steps of any walk (I’ve asked NZ Dept of Conservation how many – otherwise I’ll need to go back and count them myself.) Typical Kiwi understatement classifies it as an easy walk, but it really isn’t. Fine views from the summit, of course.

And I helped a fellow sailor replace the filter that removes sediment from the water supply for Smokehouse Bay’s simple bath house and open-air laundry (would show a photo but camera died after kayak capsize that day. Here’s a link to other people’s). And I’ve visited some totally empty untarnished solitary anchorages where there is not a single sign of humanity bar sometimes the creamy blobs of sheep on hillsides.

And, two nights ago, the stormiest weather I have ever encountered anywhere on any boat. Forecast was spot on: “Storm warning: 50 knots gusting 65 knots”. At my supposedly sheltered anchorage in Hooks Bay I recorded max 72 knots. I think some gusts accelerated over the headland. (For the technically minded I used over 40 metres chain for 5 metres depth, Rocna and snubber with rubber shock absorber, plus extra snubber, sandy clay sea bed, very very noisy, heeled and swung extravagantly, lots of empty sea downwind, anxiety levels high, clean underwear and freshly shaved in case I was found later…and I slept not a wink.) Henrietta was shaken but undamaged, though the NZ courtesy flag shredded itself badly and lost its stars, and I learn Auckland and parts of North Island suffered power failures. 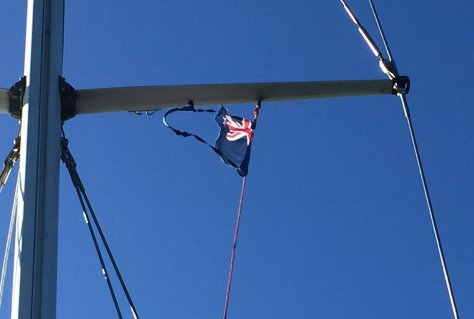 A lot can happen on a boat in a month. 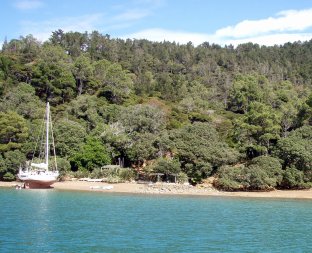