Then, two days of troublesomely rough Pacific seas brought me back to earth (as it were) and quickly dampened all and created on-board chaos: bedding in a messy pile, food containers, books, ropes, clothes, papers strewn across saloon, water bottles everywhere and it was still chilly autumn weather too. After flying involuntarily across cabin into the cooker I sat dazed on the floor feeling weary and sorry for myself,  briefly wondering what on earth I was up to. Such moments of egoistic gloom are thankfully short lived and, after painkillers and gentle panel-beating to restore the bent and twisted cooker, I was more-or-less cheery old sea salt once more, splashing northwards to the tropics, with just reefed genoa and Henrietta humming and rolling along at well over 6 knots. Soon, all is tidied up, duvet and fleece all packed away, suncream on and it’s hot sunshine….and a few days later we’re anchored peacefully, first yacht of the year, I think, to reach Vanuatu’s little southernmost island of Aneityum. 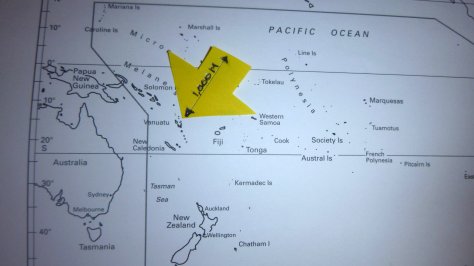 between New Caledonia and Fiji, a group of about 30 islands, half big half small, stretching about 400 miles south to north.

Captain Cook called them the New Hebrides though personally I reckon there’s only passing resemblance to the ‘old’ Scottish Hebrides. These ones are hot, tree and jungle covered, volcanic and well-spaced out for a start.

The people are Melanesian, usually curlier haired and less curvaceous than Polynesians, and super friendly, warm, easy-going, and hospitable (though such generalisations are inadequate when describing mankind’s diversities). I think the term laid-back applies..

And they’re blessed if that’s the word, with a wide spectrum of religions; a teacher on Tanna telling me that within his village of 300 souls there were Seventh Day Adventists, Presbyterians, Cargo Cult/John Frum adherents, Mormons (two folk from Salt Lake City have their work cut out), and others. Anthropologists have doubtless sweated through many Ph.Ds in such a spot. Vanuatu residents are apparently among the world’s ‘happiest’ people, though in asking around I’ve not found agreement on why this might be. 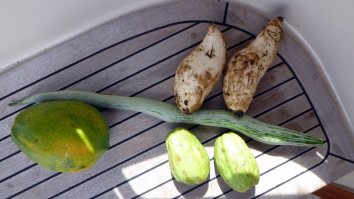 Tourism as elsewhere in the Pacific forms a useful part of the economy. Even cruise ships call in at a few suitable anchorages, briefly swamping small communities with camera-snapping and inquisitive glances. I asked a woman on Aneityum what was on ‘Mystery Island’ – the destination of cruise ship passengers when there – she paused “…not much, sandy beach, turtle maybe…and maybe Queen Lisbeth went there long time ago”. But, like the Loch Ness Monster, I suppose ‘Mystery’ Island is valuable.

On the next island sailing north, Tanna, the chief tourist attraction, and an expensive one (12,500 vatu -with transport – acceptable to me only because it gives local employment), is the constantly active volcano, Mount Yasur. Many sailing yachts call in and anchor nearby at Port Resolution, a pretty and rolly little bay, for the trip – me included. After a jolting pick-up ride our driver, Wiri, drops us at volcano HQ, from where, after well-organised arrangements with safety briefing, traditional welcome kava (for village chief), ground-thumping volcano appeasement dance and another 4WD pick-up ride, we straggle across barren grey lava field up to the volcano rim as dusk and darkness descend. 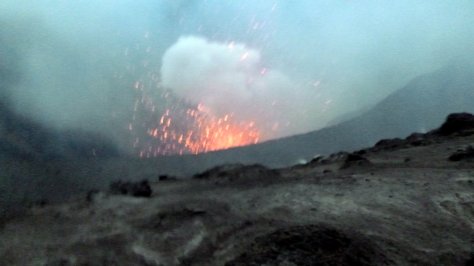 It is indeed a memorable evening; the ceaseless awe-inspiring swish of molten lava, pink-glowing steam clouds, periodic thump/swoosh/oomph of shock-waves and showers of white hot, red hot glowing lava rocks. Dust and grit in hair and eyes, sulphurous fumes and smoke blow across. We travel back subdued, feeling small and powerless alongside such natural forces. 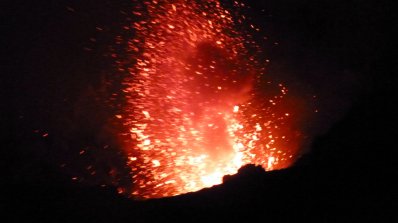 Next day and night, I sailed slowly north to the island of Efate and Vanuatu’s main town and capital, Port Vila.

Heavens above, the Oysters are here! These are the superstuds of the sailing world, yachts usually well over 55 ft with stratospheric price tags, shimmering with polish and elegant pride, sometimes professional crew. This seems to be about half the fleet of the Oyster World Rally, and usually normal sailors stay away – not because individually there is a problem with big boats or wealthy owners, just because the fleet has earned notoriety. I thought they’d be well on their way to the north of Australia by now; their schedule is demanding. (Later in the day the Oysters start to leave…)

In the background of above picture there are some of the wrecks following Cyclone Pam, a category 5 cyclone that hit Vanuatu in 2014…..see description at bottom of this photo…

Port Vila, like any country’s capital is quite unlike rural Vanuatu. Here there’s a busy bustle of people, main concrete road choked with minibuses and pickups, Duty Free shops, fashion shops and restaurants. But I’ve restocked from the colourful market and enjoyed a beer, and hope to leave tomorrow for quieter gentler places.